Harris County sheriff's deputies said a newspaper deliveryman was there to deliver the daily paper, but issues that he had with another driver followed him into the 99 Cent Only store in the 13100 block of Veterans Memorial Drive. 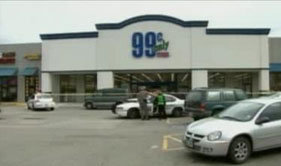 Investigators said the deliveryman pulled into the parking lot to make a delivery at the store. The deliveryman told detectives that the man who had just exchanged words and gestures with him, followed him into the store and pulled a knife.

The deliveryman pulled a gun. He claims there was a struggle near the front of the store, and that is when the shot was fired.

A woman shopping in the store was wounded in the face. She was taken to a hospital for treatment. Her condition was not released.