An incarnation of Lord Shiva Hanuman was born to king Keshari and Anjana with the help of Lord Varuna, the God of wind in the month of Chaitra on the full moon day. 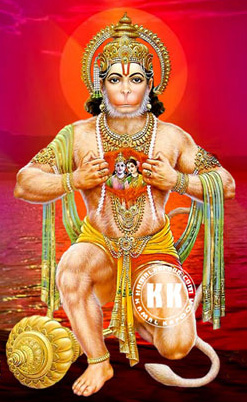 An incarnation of Lord Shiva Hanuman was born to king Keshari and Anjali with the help of Lord Varuna, the God of wind in the month of Chaitra on the full moon day.

The story of Hanuman birth

A young apsara named Punjikasthala was wondering through air and watching things, objects, animals and people on the earth. Suddenly she saw a monkey sage perhaps meditating. As she was very much proud of her beauty she felt that the monkey sage was only acting or not meditating. She started mocking him or the shape he has. She picked stones and pebbles and threw them onto him. The monkey sage ignored it for a very long time but she did not stop. The monkey sage lost his temper and cursed her to be born as a female monkey as she was mocking him a monkey.

Now she came to her consciousness. She felt sorry and understood the reality. But she was too late and now there is no scope. She must follow the curse. She asked forgiveness and regretted for her behavior. Sage replied that he could do nothing now and added that only lord Shiva could help him.

She started meditation without wasting time. She prayed for about three years without stopping for water or food. Lord Shiva appeared before her. She asked a boon that would free her from the curse. Shiva gave her the boon that when she would give birth to an incarnation of mine i.e. Lord Shiva she would be free from the curse.

In her rebirth she was born as a female monkey,  Anjali (Anjana). Latter on she was married to king Keshari. Both are living a very happy married life. As time passed one day when she was bathing she felt somebody. She asked, “Who is molesting me?” Lord Varuna replied that it was him and told that she entered her womb as Lord Shiva wished. He also added that she would give birth to an incarnation of Lord Shiva who in future would perform super human feats. Even he told that his son Hanuman would help Lord Rama in his battle against Ravana in Lanka. As time passed on the full moon day in the month of Chaitra she gave birth to Hanuman.

There are so many incidents to commemorate his actions and super Hanuman feats that only his deeds would fill the whole volume. Here are some of his deeds which made him above of all.

He was truly an ardent devotee of Rama. From his birth to his departure from his Prabhu, at the end of the story when he returned to his final abode, in his every action the center had been Lord Rama.

Even at the end of the story of the Ramayana when he along with Rama and Sita reached in Ayodhya and on the day of Rama’s coronation Sita gave him a necklace of rare diamonds. He cracked them to pieces to find if there is Rama inside it or not. When Sita asked, “Whether there is Rama in your body?” He immediately tore open his heart. To everybody’s astonishment they found an image of Lord Rama and Sita inside.

Here is an example scene how he cared, loved or honored his master. When he saw mother Sita who was applying sindoora as a sign of Rama’s wife and a symbol which ensured long life for her husband. Hanuman saw it and asked the reason of doing so. When she replied that she was doing so for Rama’s longer life. Hanumana at once smeared his entire body with sindoora as he wanted to ensure immorality for his master.

He is widely known as Sankat Mochan because he protected everyone who is in any problem. He protected Sugriva from king Bali. He was the one who saved Lakshmana when on the battle field he was injured by Indrajit. He went to the Himalayas and brought sanjivani herb. He even consoled her that she should not be sad or worry as her husband would come sooner to bring her back.

He saved Rama and Lakshmana when the king of nether land/patal Ahiravana carried him to nether land. As he had assumed the form of Vibhshan no one recognized him. He entered the place where Rama and Lakshmana were sleeping. He took both of them. He decided to kill both of them in sacrifice. Hanumana understood the whole plan. He quickly went to nether land and searched them. He assumed a very tiny form and entered the place where Ahiravana had arranged a yajna. It was planned that after the yajna Rama and Lakshmana were killed. Hanuman sat over the image of the goddess and assumed a very big form. The image went down with no more signs of its existence. Hanumana took the form of the image or the shape as it was before. Ahiravana and other could not understand anything. They completed the yajna successfully. At the end of the yajna when Ahiravana was going to kill both of them Hanumana in his original form killed him and saved Rama and Lakshmana.

Sita mata bestowed upon him a great boon that made him chiranjivi or eternal. Rama also ordered him to stay on this earth to help all those who are in difficulty or sankat. He is one of the seven chiranjivies. He is in every human and animal, living or dead. He is always present wherever there is the preaching of Ramakatha.

Hanuman Jayanti is on Chaitra Shukla Purnima as per Hindu Calendar, As per English Calendar, It's fall in following date per year

Check out Hanuman Chalisa in Hindi.