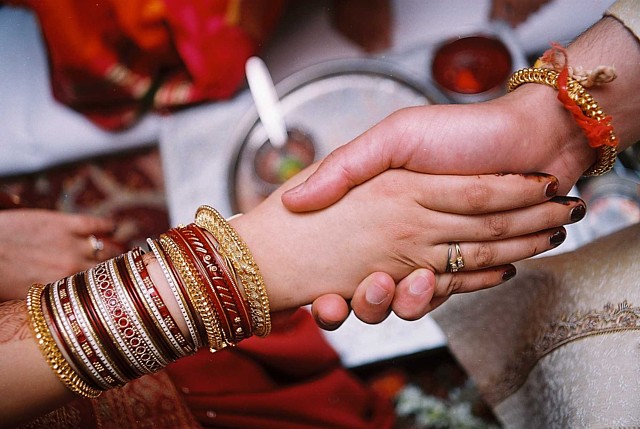 Hindu wedding ceremony is an intricate weave of Vedic scripture, folklore, and family traditions. Though the ceremony itself is solemn as it commemorates marriage, one of the sixteen sacraments, the occasion is joyous, colorful, and festive as family and friends gather to celebrate this sacred rite. It is house holder stage where in man and woman unites to become husband and wife to assist each other in performance of their religious and social duties. It is not meant to satisfy individual physical needs but is regarded as a means to spiritual glory, a necessity to develop lineage a necessary link between dead past and unborn future that must come alive. It is a lifelong commitment of one husband and one wife. Here if you make sacrifice it is not towards and individual it is sacrifice to the permanent relationship. It is a partnership between two souls who have been put on earth to pursue an ideal life of Nobility, Virtue, Righteousness, and Divine Perfection. During the ceremony, the priest chants Sanskrit mantras set in writing more than 35 centuries ago. These wedding vows unite the bride and groom's two souls so soundly, that after marriage though their bodies remain as two, their souls merge and unite harmoniously as one. Further, this ceremony not only unites Bride and Groom, but ties their two families together for generations to come. Most importantly the Groom is in the form of Lord Vishnu the preserver of Universe and Bride in the form of Goddess Laxmi the Goddess of Fortune. Each natural substance used by the priest during the ceremony has a unique significance:

At large it is performed in the following sequence.

Groom is escorted to the wedding place in a lively procession of music and dance accompanied by his family and friends. Arrival of the Groom Groom arrives at the entrance to the wedding hall and is greeted by the mother of the bride. He is also welcomed by Bride as she adorns him with a garland of fresh flowers. During the welcome, Bride's mother tries to pinch Groom's nose to playfully remind him that he has come to their door to ask for their daughter's hand in marriage. She asks him if he is prepared to make a commitment and uphold his duties toward her daughter. He then breaks an earthen pot to symbolize his confronting and overcoming various obstacles he may face as a husband. Groom is then escorted to the mandap (the wedding canopy).

The priest begins the marriage ceremony with a prayer to Lord Ganesh, the Remover of Obstacles. The groom's feet are washed, and he is fed honey and milk while sitting under the mandap. At this time, Bride's relatives try to steal Groom's shoes, adding mischief and humor to the ceremony. At the end of the ceremony, the groom retrieves his shoes by offering to buy them back.

A curtain is held between the Groom and Bride by members of both families to demonstrate that they are still separate individuals while the priest chants verses blessing the couple. At this point, the curtain symbolizing the physical world that separates the bride and groom is lowered to bring them together. Groom and Bride then acknowledge each other by exchanging flower garlands

Mangalaashtak( Invoking all the Gods from Heaven)

A traditional song of eight verses is sung to invite all the planets, Gods, and Goddesses to witness the marriage and bless Bride and Groom

Kanya Aagaman - Arrival of the Bride

Bride is then walked to the canopy (mandap) by her maternal uncles in a ceremony known as Kanya Aagamana. The bride is traditionally dressed in a heavily embellished white and red sari and adorned with gold jewelry. White is for purity and red signifies abundance and fertility.

Bride and Groom are joined by a piece of white cloth, one end of which is tied to the bride's sari and the other tied to the groom's scarf. A loop of white cotton, wound 24 times to symbolize different characteristics and virtues of human life, is put around the shoulders of the couple. They also garland each other and demonstrate their love and respect to each other.

Kanyadaan & Hastamelap (Giving away daughter in marriage and Joining hands)

In Hindu culture, giving the daughter's hand in marriage to the groom is the most precious gift that a father and mother can give. In this ancient ritual known as Kanyadaan, Groom gracefully accepts Bride as a symbol of Lakshmi, Goddess of Prosperity. Bride's father then joins the right hands of Bride and Groom as a symbol of their union. Holding each other's hand, Bride and Groom accept each other and promise to go hand in hand throughout their lives. Here in the sankalp (Vow) describes the qualities and virtues of bride as the most beautiful, true blue, right minded virtuous and in the form of Goddess Laxmi the Goddess of Fortunes.

A small open fire is lit in the center of the mandap and Agni, the God of Fire, is invited as witness to the marriage. During the mangalpheraa, the couple circles the holy fire four times, each time exchanging vows and offering prayers to give them happiness and keep away adversity. The first three rounds, led by Groom, represent the goals of life that are set forth in Hindu scriptures: Dharma (the duty to lead a moral life), Artha (the duty to lead a joyous and meaningful life), and Kaama (the duty to lead a pleasant and productive life). According to custom, the husband leads these three rounds, and the wife promises to follow his lead. The final goal, Moksha (the duty to attain enlightenment), is an individual one in which Bride states her independence by leading. After the fourth round, Bride and Groom each try to be the first to sit down in a playful competition to see who will be the "ruler" of the house.

Saptapadi, more fondly called the seven steps, has remained unchanged for over 3500 years, and is the most symbolic of all the Hindu wedding rituals. Bride holds Groom's left hand and together they recite seven wedding vows:

All your pleasures and all your pain you will divide with me, for wherever you go, there I will be. I take this first step with you.

That I may protect our family with love, that I love you with a whole heart, I take this second step with you.

That we wash our minds clean of dust in the water of wisdom, that we learn and trust together, I take this third step with you.

That we may let our joy and work lessens the suffering of others, I take this fourth step with you.

That I tend to your every need and remain ever faithful to you, I take this fifth step with you.

That we live within our means with spiritual wealth; I take this sixth step with you.

That, with this fire as witness, you are my companion until death; I take this seventh step with you.

Groom's family blesses a gold and black beaded necklace, called the Mangalsutra, and gives it to Bride. Then Groom applies a red powder, known as Sindoor, to the part of Bride's hair. This is the traditional mark of a blessed married woman in India.

This is a custom in which several married women from both sides of the family whisper secret blessings into the right ear of the bride.

Aashirvaad (Blessings from Priest and elders)

Before Groom and Bride leave the mandap, the priest blesses the newlywed couple on God's behalf, with wishes for everlasting happiness. At this time, the couple also receives blessings from their parents and relatives, and best wishes from friends.

This is the touching and emotional farewell to the daughter. Bride now begins her important role as wife, and becomes a part of Groom's family. She throws a fistful of rice so that the house of her childhood remains prosperous and happy...