Last time when Anna sat on fast 1) 6 corrupt ministers in Maharashtra had to resig, 2) 400 corrupt officers were dismissed from job 3) 2002 - Maharashtra RTI Act was passed. 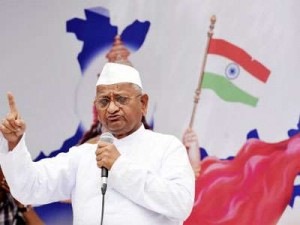 He is demanding enactment of a strong anti-corruption law - Jan Lokpal Bill - to ensure swiftness and certainty of punishment to the corrupt.

Sarabhai, Arun Bhatia, Sunita Godara, Swami Ramdev, All India Bank Employees Federation, PAN IIT Alumni Association, Common Cause, Foundation for Restoration of National Values and many other prominent organizations and
leaders, as India comes out on the streets!  200+ CITIES WILL RALLY BEHIND ANNA!

Drafted by Justice Santosh Hegde, Prashant Bhushan and Arvind Kejriwal, this Bill has been refined on the basis of feedback received from public on website and after series of public consultations. It has also been vetted by and is supported by Shanti Bhushan, J M Lyngdoh, Kiran Bedi, Anna Hazare etc. It was sent to the PM and all CMs on 1st December.

An institution called LOKPAL at the centre and LOKAYUKTA in each state will be set up  Like Supreme Court and Election Commission, they will be completely independent of the governments. No minister or bureaucrat will be able to influence their investigations. Cases against corrupt people will not linger on for years anymore: Investigations in any case will have to be completed in one year. Trial should be completed in next one year so that the corrupt politician, officer or judge is sent to jail within two years.The loss that a corrupt person caused to the government will be recovered at the time of conviction.

How will it help a common citizen: If any work of any citizen is not done in prescribed time in any government office, Lokpal will impose financial penalty on guilty officers, which will be given as compensation to the complainant. So, you could approach Lokpal if your ration card or passport or voter card is not being made or if police is not registering your case or any other work is not being done in prescribed time. Lokpal will have to get it done in a months time. You could also report any case of corruption to Lokpal like ration being siphoned off, poor quality roads been constructed or panchayat funds being siphoned off. Lokpal will have to complete its investigations in a year, trial will be over in next one year and the guilty will go to jail within two years. But wont the government appoint corrupt
and weak people as Lokpal members? That wont be possible because its members will be selected by judges, citizens and constitutional authorities and not by politicians, through a completely transparent and participatory process.

What if some officer in Lokpal becomes corrupt? The entire functioning of Lokpal/ Lokayukta will be completely transparent. Any complaint against any officer of Lokpal shall be investigated and the officer dismissed within two months. What will happen to existing anti-corruption agencies? CVC, departmental vigilance and anti-corruption branch of CBI will be merged into Lokpal. Lokpal will have complete powers and machinery to independently investigate and prosecute any officer, judge or politician.

PLEASE SHARE THIS PAGE WIDELY...this effort of educated people like you and me may perhaps be a drop in the ocean but i guess the time has come for educated and the "so-called liberated Indians" to take a stand for the future of our great country...!!!!