Mahavir Jayanti is the celebrated by Jain religion on 13th day of Chaitra month. Learn interesting story of Lord Mahavir from his birth to life time journey that lead to new religion called Jain. Mahavir is pioneer or founder of jainism but he settled the ideals and great philosophy of the late 23 tirthankaras 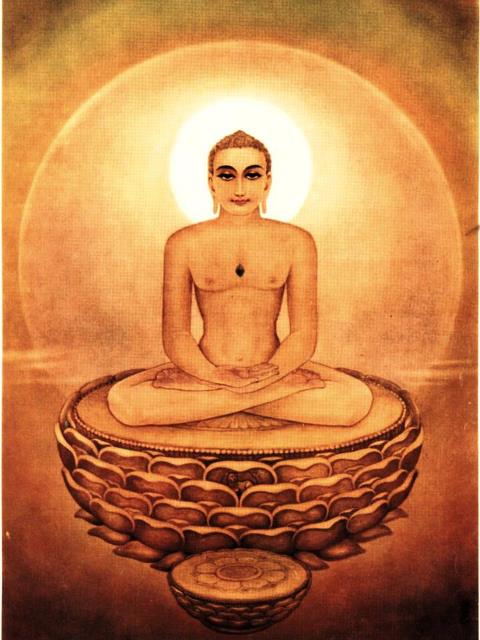 A pendant in the priceless necklace of 23 Jain Tirthankaras, Mahavir was born in Kundalagrama in Bihar to king Siddharatha and queen Trishala Devi on thirteenth day of the rising moon in the Chaitra month. It was 12th April according to the Gregorian Calendar. He left this physical world at the age of 71. It was the day of Deepawali, the diva that he lit in his life enlightened his followers of that time and even today he is a great source of inspiration.

He was a prince and his child life was full of luxurious things. During his child life he displayed great qualities of fearlessness and wisdom. His fearlessness earned him great fame and he then known as Mahavir. Sooner there happened many changes in his life. His past births and deeds inclined him to change his life style and philosophy. He started meditation. He started distance himself from worldly pleasure and wealth. He was no longer interested in his family and relatives.

He meditated for long hours and felt singleness this meditation brought him to the conclusion that he was alone in this world. He felt loneliness and curiosity to have the ultimate truth of life. So in search of the ultimate truth he at the age of about 30 renounced all his family members and worldly possessions. Even he gave up his clothing. He started his journey in search of Kevalagnana.

Mahavir wondered from village to village and town to town and faced many difficulties in his way. He was at many times scolded, beaten, and abused by the rustic and town public. Even rustic people beat him with sticks when he was in deep meditation. However, he forgave them all and went for another destination. Even in winter and summer he meditated bare bodied. Cold and hot weathers were slowly but continuously ineffective to his body. He then achieved great power where he was indifferent from injury, cuts, thirst, hunger, pain and grief. Even he was indifferent to pleasure and pain.

His meditation took almost twelve and a half years. His uninterrupted and unbroken meditation fetched him the spiritual knowledge. He attained the spiritual knowledge in the month of Vaisakh. Now he was known as Jina, one who is victorious over all kinds of attachments and aversions. As he was not satisfied with his personal salvation only he wanted all the human beings to be out of the wells of grief, pain, greed, lust and superstition.

His true understanding of what is happening in the world concluded him that only true preaching could show them right path. He preached then what is right and what wrong. He did not only preach but also followed in his action. He knew that the holy books and religious procedures were too difficult to understand. He simplified them and stressed on the point that only praying any god or human will never earn or fetch Punya. Only through righteous conduct, ahimsa, love for every, and kindness one can earn religious merit, Punya.

Mahavir even preached his Sadhus and public not to injure any animal, insect and human. He was a true believer in ahimsa. He believed that every animal, tree and human felt pain when hurt by swords or even by words.

He was not a pioneer or founder of jainism but he settled the ideals and great philosophy of the late 23 tirthankaras. He was a self-illuminate and an Indrajit. As he wanted other to be a human redeemer, he propagated his spiritual knowledge. According to him one need not pray to god to attain salvation. He directed or showed them his principals that would bring salvation. He believed in three metaphysical principals; right faith, right knowledge and right conduct and five ethical principals; Ahimsa, Satya, Asteya, Brahmacharya and Aparigraha.

Celebration of the Birth Anniversary

In Gujarat Girnar and Palitana temples are decorated on this auspicious occasion. In Rajasthan Sri Mahavir Ji temple, in Bihar Pawapuri temple and in Kolkata Parasnath temple have special arrangements. People in procession with portraits of Lord Mahavir take part in the ceremonial bath, abhishekas.

As Mahavir believed in servicing or helping people in every way his disciples move on foot from village to village and convey his great message. His Sanyasins and Sanyasinis arrange and donate food, money and clothing to the needy and poor people.