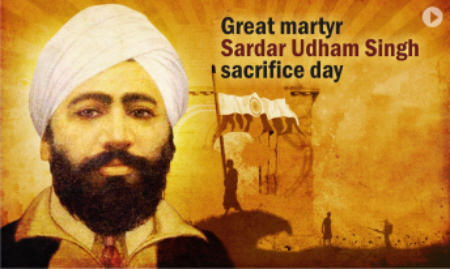 Udham Singh (26 December 1899 – 31 July 1940). One of the great Indian revolutionary has assosinate Michael O'Dwyer in March 1940 for Jaliyawala Baagh Hayta Kand. Michael O'Dwyer has order to fire against group of people gethered for the protest event including old women, women and children.

Udham Singh born on 26th of the December Shahpur Kalan village in Sunam Tehsil in Sangrur district of Punjab, India

UDHAM SINGH (shouting in the court): "I do not care about sentence of death. It means nothing at all. I do not care about dying or anything. I do not worry about it at all. I am dying for a purpose." Thumping the rail of the dock, he exclaimed, ‘We are suffering from the British Empire.’ Udham Singh continued more quietly. "I am not afraid to die. I am proud to die, to have to free my native land and I hope that when I am gone, I hope that in my place will come thousands of my countrymen to drive you dirty dogs out; to free my country."

Reaction of Mahatma Gandhi on assosination of O'Dawyer over Udham Singh

Rreaction of so called FATHER OF NATION to the Press, Mahatama Gandhi had condemned the 10 Caxton Hall shooting saying that "the outrage has caused me deep pain. I regard it as an act of insanity...I hope this will not be allowed to affect political judgement". A week later, Harijan, his newspaper further wrote: "We had our differences with Michael O'Dwyer but that should not prevent us from being grieved over his assassination. We have our grievances against Lord Zetland. We must fight his reactionary policies, but there should be no malice or vindictiveness in our resistance. The accused is intoxicated with thought of bravery".