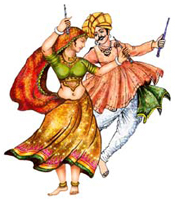 FOGANA is an acronym for The Federation of Gujarati Associations of North America was founded in 1980.The aim was to bring all the Gujarati people living in North America closer together by promoting a common platform to sustain and perpetuate the cultural heritage of Gujarat, India. Initially, FOGANA aspired to meet the needs and welfare of Gujaratis while assisting them in adapting to the mainstream America. They hoped to do this by building up and  centralizing resources, energies and talents and thus create a stronger image of the Gujaratis.

Using such tools as folk dancing, which is an integral part of any celebration in the Gujarati culture, they initiated their effort by conducting folk dance competitions in various regions that culminated in finals in one or other North American city. Gujaratis from all corners gathered for these events. Workshops in cultural aspect such as dance, costumes communities, music etc. was offered. Also Drama and Debate competitions/festivals were conducted in some of the regions as well as a Conference in Washington. Visiting dignitaries in many fields were honored and brought in contact with the Gujarati community at large.

These initial years saw FOGANA progress steadily, but today our goals are expanding to meet our changing needs. Not only do we wish to combine the dynamic ability of the Gujarat's with the practicality of today's life, but make it relevant to the changing face of the community. Where the younger generation has an identity because it has been brought into the fold with a sense of security that has come from being well versed and knowledgeable in their heritage Where Gujarati language education is such that any American schools or Universities will accredit it. Where any social issues can be addressed with the full support of the community and especially those of us who have been blessed with the most. Where the Gujarati community is perceived by America as an asset and a model, dynamic ethnic group. The result, we feel will be a whole new generation of secure, informed and authoritative ambassadors where Gujarati heritage and its values is concerned. A breed whose scholarship and credentials will not be questioned by any, no matter how prestigious the institute or scholarly the individual.

Gujarati Cultural Association of Bay Area (GCA) was established in 1979. GCA was established to fulfill and maintain the cultural heritage of the community that originates from the state of Gujarat in India. Currently the Gujarati population in Bay Area is around 7000 to 10000. Current GCA roster has 3060 members.

Gujarati Samaj of New York was established as non-profit organization in 1974. Over last 24 years Samaj has conducted several projects to promote Gujarati Culture amongst tristate New York area residents. In 1985 Samaj built its own Center which can accommodate up to 700 people.

We (Gujarati Samaj of Greater Pittsburgh) are a cultural organization involved in promoting Gujarati heritage, its rich culture, language and literature. We have one common goal: “Creating a positive and enjoyable experience of Friendship, Happiness and Harmony”. Membership to our organization is not limited to any particular race, religion or ethnic origin.

Gujarati Samaj of Detroit (GSOD) was founded in 1975 and has become an icon in Michigan community. GSOD is one of the largest ethnic, cultural organizations in the entire mid west area. The goal of GSOD was to unite all Gujarati people under one roof and to promote and preserve our culture, heritage, language, social and cultural awareness and respect of Gujarat, India by providing a platform to Gujarati community while serving the community needs.

The activities developed steadily through the past 30+ years and have culminated in a strong and vibrant Gujarati cultural organization. The foundation of our Samaj is strong due to the hard work and dedication of our past and present Executive Committee and Board of Trustee leaders, volunteers, as well as the ongoing support from our Gujarati community. The commitment of its strong cohesive membership has never looked back.

Gujarati Samaj has served a number of activities and services to communities and youth organizations, cultural activities such as: Garba, Raas, Gujarati drama, lok sangeet, Gujarati classes and festival celebration such as, Holi, Navratri and Diwali. Gujarati Samaj also has helped raised and contributed funds towards the Gujarat Earthquake in 2001, Tsunami in 2004, Geetmala Foundation in 2005, and the recent floods in Gujarat. Gujarati Samaj is a very strong community with over 900 members, representing a total of over 2,500 people.Today, our goal remains to increase our membership, invest in the next generation--our youth, and to build a central location for Samaj to provide resources to our community……from our children to our senior citizens.

As we enter into the new century, we want to lead Gujarati Samaj to new technology by providing Internet edge, allowing our youth to participate with excitement and enthusiasm, who will proudly continue to carry our heritage.