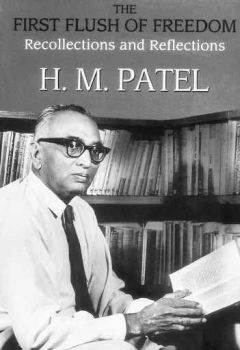 The great son of Dharmaj, Shri Hirubhai Muljibhai Patel widely known as Shri H.M.Saheb was born at Mumbai on 27th Aug’1904 A.D. His father, Shri Muljibhai Patel was a teacher and mother Surajben, a housewife. His uncle too, was a teacher. As such, being nurtured and brought up in an intellectual environment he developed good thirst for education and deep love for literature since his childhood.
After completing his Secondary Education at St. Xaviers High School in Mumbai he went to England for further studies at the very young age of fifteen. He got himself admitted to Oxford University, and after passing London Matriculation Examination in 1929, he had his graduation with subjects like Philosophy, Politics and Economics (Modern Gates).Thereafter he appeared for ICS Exams ( Highest Administrative Exams) in 1926 and successfully passed it with good results. He joined as Assistant Collector in Larkhana District of Sind, and continued giving his service in central government till his retirement.

During his tenure as the Finance Principal Secretary, he unified all the Insurance Companies in a smooth manner and it was the feat of extra- ordinary organizational competence. H.M. Saheb, was elected as an M.P. several times and became Finance Minister in Morarji Desai’s Cabinet in 1977.His major activities during this time were reducing inflation, price stabilization and removal food zones. Because of his interest in conservation of wild life, he was appointed as the Chairman of Indian Board of Wild life.

He held very high positions in Central Government and retired from services in 1959. His post retirement life was dedicated to the upliftment of rural people in and around VallabhVidyanagar which naturally became his “Karma Bhoomi”

He was a great torch bearer of education. His rich personal library, his command over many languages, his likings for participation in academic meets his love and regard for men of letters , his writings and speeches on education, his deep concern and worry for declining standards of education and his concrete suggestions for raising the same, speak high of his being a dedicated academician.

Even when he became Union Cabinet Minister he did not distance himself from his primary involvement with education. The educational complex at Vallabh Vidyanagar originally founded by Bhaikaka and later on meticulously nurtured by Shri H.M.Saheb as Chairman of the Charutar Vidya Mandal, started several schools and colleges imparting knowledge and wisdom.With the addition of several institution during his tenure like H.M.Patel, institute of English College of Pharmacy, Sardar Patel Renewable Energy Institute( SPRERI), School of Architecture etc. bear eloquent testimony to this. Added to this he set up a Medical College and an attached Hospital, later named as “ The H.M.Patel Centre for Medical Care and Education” which houses Pramukh Swami Medical College, the Shree Krishna Hospital Physiotherapy School, Nursing School and DMLT Centre.

Shri H.M.Patel was one of the few persons in Gujarat who emphasized the importance of learning English in order to keep pace with the changing world. His emphasis on learning English has been proved correct with the emerging horizon of the computers, Information Technology and Bio-Technology. He was a perfectionist par excellence and a long term planner.

The creation of various infrastructures, sports facilities like H.M.Patel Badminton Hall, Tennis Courts, Facilities on Sashtri Maidan etc. and holding of numerous  sport tournaments of National level at V.V.Nagar became possible only because of his philosophy of an integrated personality development of students. Further Shri H.M. Patel had realized the importance of NCC in developing discipline, honesty, sincerity, courage, bravery and hard work amongst the future generation of India.

The towering Personality of Shri H.M. Patel Saheb could be gauged from the letter writtenby our first Prime Minister Jawaharlal Nehru on 3rd Feb1949, to Sardar Vallabhbhai Patel praising and nominating H.M.Saheb to be in charge of the intricate Kashmir Issues. The former Prime Minister also hinted that Shri H.M. would be the most suitable person for tackling another important problem of free India that is Food Control. It is worth while remembering few words of H.M. Saheb on this auspicious day.