Priti Patel is a British Conservative Party politician. Learn interesting biography of Ms Priti Patel of Briths MP Ms Patel hails from Gujarat and still has got a love for her ancestral home in India. 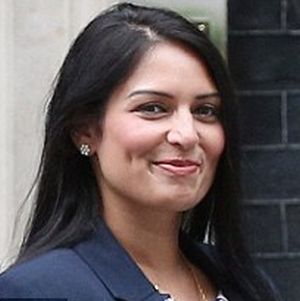 Priti Patel is a British Conservative Party politician and is also the Member of the Parliament (MP). She is the MP for the Witham Constituency in Essex. She assumed the post in the year 2010. She has currently gained additional responsibilities in the British Parliament. She is now the minister of the state, for employment. She gained this particular position recently as on May 15th 2015. The 43 year old, ambitious lady is still sitting at the cabinet.

Priti Patel was born on the 29th of March 1972, in London, England. Her parents originally hail from Gujarat, and incidentally settled down in Uganda. They were in fact Ugandan immigrants. They came down to Britain in the year 1960. This was when Idi Amin announced expulsion of Ugandan Asians. Her parents then set up news agents in London and south east of England.

Priti grew up in South Harrow and Ruislip. She did her schooling in Watford Grammar school for girls, which is in a place named Watford. She then went on to do her graduation programme in Economics from the Keele University. She has also studied sociology and socio anthropology from the same university. She then went on to do her post graduate programme at the University of Essex.

After the completion of her graduate programme, Ms Patel was offered a job at the Conservative Central Office in London. She got the job from the head of the Conservative Research Department, named Andrew Lansley. She stayed at this office from 1995 to 1997. She then contested in the Referendum party elections where more than 800,000 votes were polled. There was another constraint at Conservative party, during that point of time. It said, it would join the Euro league, only if there was a referendum on the issue. Because of this, she was forced to quit Referendum party and thus re-joined the Conservative Party. This was a new office, under the leadership of William Hague. There was an article in the Financial Times, which triggered quite a controversy, started off, by Ms Patel. She had stated "Racist attitudes do persist within the party, there is a lot of bigotry around”.

This was misinterpreted that she avenged the team that candidature was blocked on account of her ethnicity.

Her political career as the Member of the Parliament, London

She was unable to successfully notch the general elections held in the year 2005 for the Nottingham North. However she did not give up. The determined lady took the guidance of David Cameron who then identified her as a promising candidate. She then received a prominent place among the “A-list” of conservative candidates. In November 2006, she then went on, to capture radiance as the Prospective Parliamentary Candidate, under Witham, a new constituency in Central Essex. She made sure she won the very same constituency by bagging a sizeable majority at 2010 general elections.

Her name appeared on the Number 10 Policy Unit in October 2013. That very summer, she was promoted to the Exchequer Secretary, from the post of a treasurer. The 2015 general elections sees her as the cabinet level Minister of Employment at the Department for work and Pensions. Patel has gained such a highly esteemed level of prominence in London as she now serves the right wing of the Conservative Party. She is described as the modern day’s Norman Tebbit. She has achieved quite a lot, as a part of her career spree and has even gone beyond. She opposes prisoner voting. She has worked hard, towards the restoration of capital punishment to give a fitting lesson to hard core criminals. She spoke on the issue concerning at the same at the BBC question time in September 2011. Kelvin Makenzie has complimented on her notable set of achievements and has suggested her name, for the position of a Home Secretary. He also teams up with her, at the Member of the Parliament. He feels she is a young bold lady who can easily differentiate the good from the bad.

She was instrumental in protesting Jeremy Bamber and his team, who had committed quite a lot of murders at her own constituency. She denied his appeal to the media, and protested his innocence. Throughout her career at the Parliament, Ms Patel has remained very supportive of tobacco industry positions. In October 2010, she voted in favour of the smoking ban to be over turned. She wanted plain packaging of cigarettes to be considered. And she had written a formal plea to the Govt. in this particular regard. She wanted the whole gamut of tobacco industries to survive as quite a lot of poor labourers and wage workers depended on the industry for their bread and butter. She has also campaigned for alliances namely Wine and Spirit Trade Association, The Scotch Whisky Association and the Tax Payer’s Alliance.
A look at some of her notable achievements

a) People in this country are fed up with human rights being used as an excuse for unacceptable behaviour.” As is the best quote stated by Ms Patel, as the Minister of the Conservative Party. She strongly condemns idle behaviour at the work place. And has worked vigorously for a number of social economic issues.

b) For both fuels we will continue to urge oil companies to pass on all maximum benefits from the price reductions in oil, so that consumers feel the benefit at the pumps. This was for both petrol and diesel. The Treasury Minister, Ms Patel was quoted as saying to the Sun times, London.

Ms Patel is an ardent fan of Narendra Modi. She met him during a high level British delegation led by Secretary of the State- William Hague and Chancellor of Exchequer George Osbourne during their tour to India, in the year 2014. She supports long term and friendly policy agreements between India and UK, in finance, trade and commerce. She says, it is the natural ongoing bonds between India and UK, that this partnership is viable. As long term prosperity is at the core of both India’s and UK’s foreign policy, the future of this partnership or liaison is stronger than before. She has confirmed friendly Indo-UK deals with Narendra Modi post his success at the Indian elections in the year 2014. He was the Chief Minister of Gujarat and went on to win the elections to become the Prime Minister of India.

On a personal front

Ms Patel is married to Alex Sawyer and the couple is blessed with a son named Freddie.

Indian elections are being watched very closely in capitals around the world. In London too, politicians from the Conservative Party are keenly tracking the world's largest elections. They have in the past, reached out to BJP's prime ministerial candidate Narendra Modi. Was the policy a good idea? Conservative MP Priti Patel thinks so. She is the Prime Minister's UK Indian Diaspora Champion and advises him on India-related matters. Speaking to NDTV, Ms Patel said how the David Cameron government was looking at the election results in India.