Narsingbhai Patel settled in a town called Bhadran near the Bhadrakali Mata Temple. The town was originally named Bhadrapur. Years ago in Padampur, nearly two kilometres away from Bhadran town 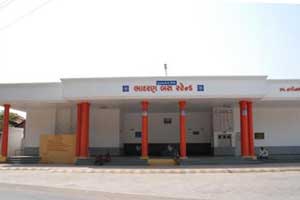 Town BHADRAN is situated on the 22*.2’ north Latitude and 72*.54’east Longitude. It is under Anand District in Taluka Borsad. The area is approximately over two square kilometres with a population nearly 10,000, mainly of Patel's and Kshatriyas with some other casts.

In 1796 A.D. Narsingbhai Patel settled in a town called Bhadran near the Bhadrakali Mata Temple. The town was originally named Bhadrapur. Years ago in Padampur, nearly two kilometres away from Bhadran town, there used to live two very strong brothers named Bhadrasur and Aghasur. The majority of the people here were very cruel. They defeated Devas with a power graced by Mahadevji. Agonized Devas prayed to the mighty goddess Uma and two Shakties named Bhadrakali and Ambaji, were created.

Bhadrakali and Ambaji killed Bhdrasur and Aghasur respectively so Devas established temples of both Matajis. In due course Padampur was destroyed.

In Samvat 1232 (1176 AC) on Sunday the sudi 11(before full moon) of month Vaishakh Bhadrapur later known as Bhadrn and finally as the time passed, today's BHADRAN, was officially formed. Garasia and Patidar communities were the main population.

According to the Data in the Family Tree of the Patels of the seven towns, published in 1925 C.E., the first Patel, named Ananda, came from Anklav in Samvat 1415 and lived here.

Gradually his generations, as new Patel's used to live and settle with them. From the eleventh generation of four brothers, eldest and the second number named Revandas and Dhanjibhai respectively started to live in a section called Moti Khadki. Third and fourth numbers named Harkhjibhai and Manjibhai, in another section called Nani Khadki. Together with above, now, Bhadran is flourishing with the influx of all different communities with new Patels from different places.

Before Independence, due to advancements in all aspects, Bhadran was known as the Paris of Vadodara State under the rule of Maharaja Sayajirao Gayakwad. In those days, we had water supply system, Gayakwad Narrow Gauge Railway used to start from here to Vaso, the same huge Town Hall surrounded by beautiful garden now occupied by Gram Panchayat, on the bank of a huge pond. We were lucky to have drainage system first when most of the other towns had no dream that such a thing ever existed. People from all over the surrounding areas used to get treatment in the State run hospital. This is now run by Bhadran Mitramandal (Mumbai Sanchalit) and has been transformed into a small but ideal hospital and is in the process of expansion to offer all possible types of specialized services within the capacity of available funds from the DONORS, and for organizing this system the real credit goes to late Dr. Jamanadas Patel. We have a Veterinary Hospital for animals too

Be Admin of the site of Bhadran