Sojitra was under constant attacks by the Muslims in particular Mohammed Gazni - the robber from Persia. Learn more about History of Sojitra, Sojitra on Gujarat Map, Sojitra Gaam. 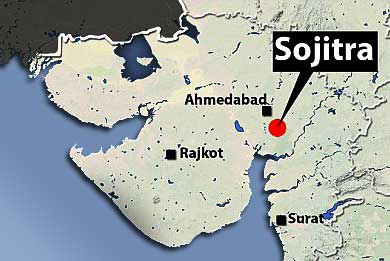 The history of Sojitra began about 900 years ago. Our forefathers lived as minority Hindus in a majority Muslim community based in the Gujaranwala district of Pubjab provience (currently situated in Pakistan). In the name of religion, Muslim fanatics used cruel force in the attempt to convert Hindus into Muslims. Around 1116AD our forefathers, Hindu Punjabi farmers had no choice but to move away from the area in order to protect their families and livestock. They migrated towards the fertile valley of Ganga in hope to settle in peace.

As the saying goes, "The Crow is black everywhere" and once again they came under constant attacks by the Muslims in particular Mohammed Gazni - the great robber from Persia. Having no further protection, they decided to move towards Malwa, a kingdom of Raja Bhoj. Without having any success in obtaining land in an already crowded area, they carried on moving South towards Khambhat. It is beleived that during this migration each Hindu Punjabi farmer began to occupy a non-populated village with its barren land.

During the reign of Raja Bhimdev 1st, our forefather Virabhai obtained a peice of land in Devataj, a village near Sojitra where he and his generations from Mavjibhai, Laljibhai, Shamjibhai, Govabhai, Gopalbhai, Nensibhai, Malalbhai, Govabhai, Veranbhai, Novabhai, Virabhai to Jesangbhai settled. Jesangbhai was born in 1462, during the reign of Mohmmed Begdo in 1550. Jesangbhai was chosen to administrate, farm the land and keep law and order in the Sojitra Village. In return he had to pay a royalty of Rs 3000 per year to the Sultan of Gujarat. Under his skillful administration he invited various craftsman and tradesmen from other communities to improve the village economy.

Jesangbhai had a son called Sarang who in turn had a son called Vishram. Vishram was married twice. He had three sons by his first wife (Harkhajibhai, Sunderbhai and Bhuderbhai) and four sons by his second wife (Saudasbhai, Meghabhai, Shridharbhai and Pragdasbhai). During the reign of Shahjahan (1627) new land reform laws came in to practice and in 1631 disaster struck - famine and draught which lasted for twelve years.

The new reforms and famine left Jesangbhai which no choice but to divide his 5300 acres of land equally into the names of his seven grandsons. These seven parts of land became known as "Khadkis" - which stil exist in Sojitra today. The generations who live in these Khadkis are called "Patidars".

Pati - means a part of land, and the person who owns it is refered to as a "Patidar". As time went by, Patidar became Patel - a common name in our moden time.