The root of Hindu Dharma (religion) lies in the Indian subcontient, in the Indus valley (valley of river Sindhu) where over 300 advanced settlements existed as early as 5000 BC. 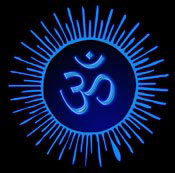 The root of Hindu Dharma (religion) lies in the Indian subcontient, in the Indus valley (valley of river Sindhu) where over 300 advanced settlements existed as early as 5000 BC.  Hinduism, the world's oldest living dharma (religious philosophy and the way of life) has no founder, single teacher or prophet. Hindu Dharma is called Sanatan Dharma or Eternal Dharma. the word Santan implies that it always existed. Those who follow this faith are known as Hindus. Hinduism is the world's third most practiced religion with over 900 million followers. Over 80% of the population of India regard themselves as Hindus. Hinduism is one of the most tolerant, resilient, peace loving and pantheistic religions.

Hindus believe in one God, the universal soul(Brahman), Param-Atma (Suprime Soul), as the sole reality. Brahman has no form and eternal. Brahman is creator, presever adn transformer of everything. God is al pervading, all-existing and all-blissful. That formless god can best be realized by concentrating on various forms of ideal personalities as recorded in the scriptures. In other words, Hindu religion is flexible and provides many ways to develop one's spiritual ideas in order to suit individual needs.

Brahman is present in all beings and appears in the human spirit as Atman or soul. In other words, all living beings are the manifestatiion of one Suprime Being (Brahman). Atman is the essence of all living things. It is infinite and eternal, unchanging and indivisible. It cannot be destroyed by weapons nor can it be burned by fire. The true nature of the individual is the Atman, which is one with the underlying reality of the Universe. There is but one being. one reality "Thou art That"

The ultimate goal of Atman is Moksha (reunion with Param-Atma- God). There are various way by which the individual, in accordance with his/her temperament, can realize God. That is way HIndus do not seek to convert and that is why Hinduism easily accepts different modes of worship. It believes that just as rain water falling anywhere leads to one ocean, all true religions, and respects their teachings as the same eternal truths adapted to the needs of different peoples at different times.

Hindus believe that whenever righteousness declines and unrighteousness, sins or tytanny overcome the world, God incarnates himself on earth to restore righteousness.

Hinduism ponders the meaning of life, and after-life and offer suggestions on the continual  ascent in the "chakra" or a circle of life. A doctrine of Karma and rebirth is central to the Hindu faith. Hindus believe that the soul passes through a cycle of successive lives - birth, death and rebirth untilll all "karmas" have been resolved and "moksha", spiritual knowledge and liberation from the cycle of rebirth is attained.

Once's next incarnation is always dependent on how the previous life was lived. So if one behaves badly in his this life, his next incarnation is likely to be more unpleasant than the current one. One reaps what one sows. Also that will delay Realization of Moksha (union wiith God) or freedom from cycle of birth, death and rebirth.

Hindu believe Atman (soul) is eternal, it  never dies. When a person dies, it simply  changes the body. Only the body that housed the departed soul is destroyed (cremated).

Hindu believe that life is sacred and should be loved and revered. Therefore it is important to practice "ahinsa"  or non-violence. Voilence is all manners, by words, deeds, in forms of murder or suiicide is considered sinful.

Since atma is a manifestatioin of Param-Atma (God), all beings (Jeevas) are part of God and hence there is total equality. For Hindus there cannot be any discrimination on any basis.

Hindus do not rely on a single book as authority. The religion has many sacred writings: Vedas, Upanishads, Brahma Sutra, Sutras, Bhagwad Gita etc. Its uniqueness lies in its being based on the super conscious experiences and spiritual realizations of a galaxy of saints, sages and seers.

As you can see Hinduism is more than a religion, it is a philosophy. Hinduism provides a medley of choices like a well balanced meal to bring spirituality. calmness and openness to our lives.