Rakhi, Raksha Bandhan the bond between brother and sister

Rakhi, Raksha Bandhan the bond between brother and sister

Rakhi: The Hindu festival is also called Rakshabandhan. Word is made of 'Raksha' protection and 'Badhan' bond the word itself clears its meaning. The festival of great love, an expression of devotion and unconditional bond between brother and sister is called Rakshabandhan

Rakhi: The Hindu festival is also called Rakshabandhan.  Word is made of 'Raksha' protection and 'Badhan' bond the word itself clears its meaning. The festival of great love, an expression of devotion and unconditional bond between brother and sister is called Rakshabandhan. It falls in the month of Shravana on the full moon day. As it falls on a full moon day (poornima or punam) and the most important thing done on this day is tying a rakhi; it is also known as Rakhi Purnima.

It is not a celebration of brothers and sisters only but those who feel the same kind of pure love can also tie Rakhi i.e. unrelated male and female or adopted brothers and munh bola bhai also enjoy this festival. This is a festival of sharing love an expressing deep feeling.

The festivities start in the very early morning, female members of the family wake up and decorate the house, prepare some sweet and pray to GOD. They do some sacred rituals like worshiping and devoting sweets to GOD. Even they offer jalebi, kaju katri and burfi (Indian sweets) to GOD and pray for the healthy, wealthy, long and prosperous life of their brothers. Brothers also bought gift for their sisters keeping in mind their choice and need. They also promise their sisters that they would protect them throughout their life and will be always available in any difficulty.

The festive celebration starts thus: there comes the holy and sensational scene when a sister literally with a thali full of sweets, Diva, Akshat/rice, Kunkum and other things takes Aarti (an action of moving the Thali) of brother in devotional way. She ties the sacred Rakhi and feed sweets, does Tilak with Kunkum and Akshat on brother forehead. Brothers also express their love and gives gift. They also promise to help them in every situation.  This is an exchange of love and feelings.

Indian cultures not only full of festivals but also authentic stories behind them. If one does not believe the story, the emotions and presentation is so unique that one can not control himself following the tradition. Here is a legend of Ma Santoshi. Lord Ganesha’s sister once came to tie Rakhi. She tied him the sacred thread. Shubh and Labh Ganesha’s son saw this and moved to tears. They asked their father to provide them a sister. Ganesha asked help from his wives Riddhi and Siddhi. His wives with great and powerful flames created Ma Santoshi, a very beautiful, charming and powerful goddess of satisfaction. This way Shubh and Labh got a sister. 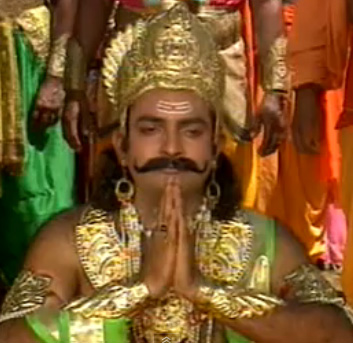 The incident of Lord Krishna and peerless queen Draupadi takes us far into the time of Mahabharata. During a very crucial fight, Krishna was hurt on his wrist. It was bleeding heavily, Draupadi saw it and without waiting for a minute she torn her sari made a strip, and tied it around the wound. Krishna was much amazed and happy with this. He promised Draupadi that he would help her in any situation, anytime, anywhere. Thus the silk strip as a symbol of pure love and a bond of true friendship tied both Draupdi and Krishna as brother and sister. Later on when in the palace of king Dhritarashtra during the gambling match king Yudhishthira lost all his wealth and later on he lost peerless queen Draupadi. Duryodhan asked Dushasan to bring Draupadi in the palace and remove her sari (removing cloths of woman as a symbol of dishonor). Draupadi was brought in the palace and when Dushasan was trying to remove her sari during the ‘chir-haran’ incident she asked help from Krishna. Krishna completed his promise by extending the sari to no end. He saved her from insult and humiliation.

Here a legend of goddess Laxmi and King Bali is worth mentioning. Bali was a great devotee of Lord Vishnu. Once when Bali was doing tapasya in the forest Lord Vishnu bestowed upon him a great blessing. Vishnu promised him to protect his state and public from any attack. But due to the promise he had to stay in his palace leaving his abode: Vaikunth. Laxmi could not live without him in Vaikunth. She came to Bali’s palace disguised as a woman and served king Bali. Once on a full moon day she tied rakhi to Bali. Bali in return asked her to ask anything she wanted. She asked her husband back as she could not live without him. King Bali understood that this was goddess Laxmi so he fulfilled her wish and freed Lord Vishnu from his service as a protector. The incident shows the joy of taking and giving.