The Traditional Hindu festival "Raksha Bandhan" or "Rakhi" (knot of protection) was came into origin about 6000 years back when Arayan created first civilization - The Indus Vally civilization. With many languages and cultures, the traditional method of Rakhi festival celebration differ from place to place across India. Following are some historical evidences of Rakha Bandhan celebration from the India history

The Traditional Hindu festival "Raksha Bandhan" or "Rakhi" (knot of protection) was came into origin about 6000 years back when Aryan created first civilization - The Indus Valley civilization. With many languages and cultures, the traditional method of Rakhi festival celebration different from place to place across India. Following are some historical evidences of Rakha Bandhan celebration from the India history

The story of Rani Karnavati and Emperor Humayan is the most significant evidence in history. During the medieval era, Rajput were fighting Muslim invasions, Rakhi at the time meant a spiritual binding and protection of sister was foremost. When Rani Karnawati the windowed queen of the king of Chittor realized that she could in no way defend the invasion of the Sultan of Gujarat, Bahadur Shah, she sent a Rakhi to Emperor Humayun, The Emperor touched by the gesture started off with his troops without wasting any time.

The oldest reference to the festival of Rakhi goes back to 300 BC. at the time when Alexander the Great invaded India, It is said that the great conqueror, King Alexander of Macedonia was shaken by the fury of the Indian King Puru in his first attempt. Upset by this, Alexander's wife, who had heard of the Rakhi festival, approached King Puru. King Puru accepted her as his sister and when the opportunity came during the war, he refrained from Alexander. 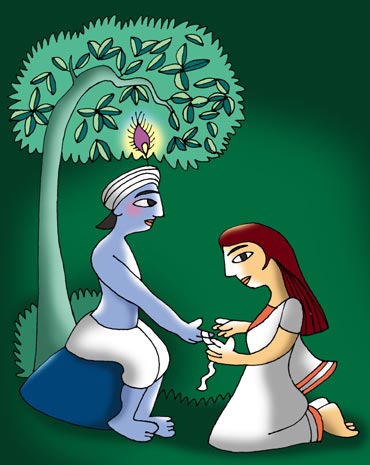 In order to protect the good people, Lord Krishna killed the evil king Shishupal. Krishna was hurt during the war and left with bleeding fingure. Seeing this, Draupadi had torn a strip of the cloth from her sari (saari) and tied around his wrist to stop the bleeding. Lord Krishna, realizing her affections and concern about him, declared himself bounded by her sisterly love. He promised her to repay this debt whenever she need in future, Many years later, when the Pandavas lost Draupathi in the game of dice and Kauravas were removing her saari, Krishna helped her divinely elongating the sari so that they could not remove it.

The demon King Mahabali was a great devotee of Lord Vishnu. Because of his immense devotion, Vishnu has taken the task of protecting Bali's Kingdom leaving his normal place in Vikundam. Goddess Lakhsmi - the wife of Lord Vishnu - has became said because of this as she wanted Lord Vishnu along with her. So she went to Bali and discussed as a Brahmin woman and taken refuge in his palace. On Shravana Purnima, she tied Rakhi on King Bali's wrist. Goddess Lakshmi revealed who she is and why she is there.

She and Lord Vishnu's good will and affection toward him and his family touched the king, Bali requested Lord Vishnu to accompany her to vaikuntam. Due to this festival is also called Belva as Bali's Raja's devotion to the Lord vishnu. It is said that since that day it has become a tradition to invite sisters on Shravan Purnima to tie sacred thread of Rakhi or Raksha Bandhan