Ode was known in ancient times as Pranavpur. In former prosperous times, the Banzara (Gypsy) community built a Vav (a well with steps) and an inn for large numbers of visitors. Part of this inn was used as a middle school until 1945. 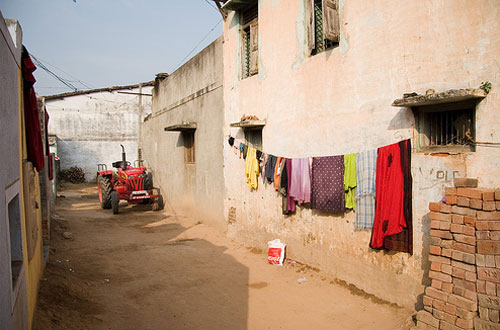 Ode is located at 22°37' North latitude and 73°07' East longitude in the Anand district, Gujarat, India. The Ode railway station is located about three miles from the Western Railway’s Anand-Godhara rail-line. Ode is served by the State Transport system providing bus services to major cities and surrounding villages

Ode was known in ancient times as Pranavpur. In former prosperous times, the Banzara (Gypsy) community built a Vav (a well with steps) and an inn for large numbers of visitors. Part of this inn was used as a middle school until 1945. During the struggle for Indian independence, Ode was the center for the area’s Satyagraha movement. In 1930, Narshibhai Jivabhai Patel of Nar sacrificed his life for the movement. The 'Narshi-Bhavan' monument was built in his memory. This building was used as a Dharmashala (guest house) as well as a girls' school.

The village has a population of 20000 within 9.9 square mile area. The local population consists of Patidars, Harijans, Brahmins, Banias, Kshatriyas, Muslims, and Christians. Once, it had a sizable population of learned Brahmins who attracted many young pupils to learn Sanskrit and Astrology. The majority of the population is Patidar, who are involved in various types of business. Many have settled abroad in the United States of America, United Kingdom, Middle East, and African countries.

The local Education Board operates a primary school for boys and a another for girls. Both these schools were built with a generous donation from Marghabhai Kishabhai Patel. A high school under the name “Sardar Patel Vinay Mandir” is managed by the Ode Kelavani Mandal under the guidance of the Charutar Education Society. This board also manages a Kindergarten school. Under the banner of various educational bodies, several educational programs are catered to youths and adults. These programs include typing classes, painting, music and home science. Two collages, Devjibhai Muljibhai Pater Arts College and Shanabhai Shankerbhai Patel Commerce, affiliated with Gujarat University are located on the Dakor Road. Pramukhswami English Medium School is located near the water works on the Ode Kelavni Mandal Campus at Bijahar Talav.

The Mangaldas Laxmidas Patel Public Library, situated near the hospital, is equipped with a large volume of books on various subjects.

Ode has a Jivabhai Patel Charitable Dispensary that has rendered a wonderful service since its establishment. Bhikhabhai Jivabhai Patel has donated generously for the “Kasturba Maternity Home” located near the hospital. Mr. Rambhai B. Patel also contributed to build and equip the operation theater for the hospital. This hospital has been a boon to Ode and surrounding villages.

Agriculture is the main source of income for Ode. Tobacco, peanuts and bananas are the main cash crops for farmers. Ode has a cooperative dairy that operates in association with Amul Dairy to serve the farmers. There are several small scale industries such as, poulty farms, printing presses, screen printing presses, machine shops, saw mills and auto garages. In order to support the cash crop industry and small businesses, Ode is a home for several transport companies. It has a cooperative bank and branch offices for the Central Bank of India, Dena Bank and Urban Bank. Ode Seva Samiti provides financial assistance to various organizations aiming for the town’s multi-purpose development.

Ode’s population, being mostly Hindus, is the home for many temples. However, it respects other faiths and as a result it also has two mosques for Muslims and a church for Christians.

Be Admin of the site of Ode