Sardar Patel and Hyderabadi Nizam, Why Hydrabad Join India. How Sardar Patel tackle Hydrabadi Nizam. Patel sent Indian Army to covered entire Hyderabad from outside, and talk with Nizam that if you would like to part of India, you are welcome or we are also Independent to take any decision about Hyderabad by hook or by cook 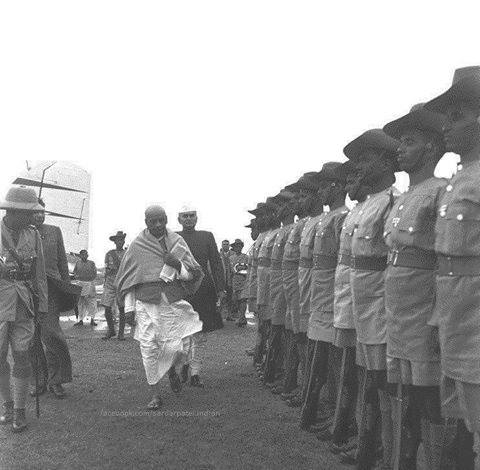 There may be those Indian are now on their sixties or seventies, those people are witness about Hyderabadi Nizam Quasim Rizvi who wanted his kingdom to be separate nation or called mini Pakistan. Quasim Rizvi was virtual ruler of one of India's largest states – Hyderabad – equal to the size of France. Since British declared each and every small princely state are Independent without any agreement with Congress, with Intention of break down nation into small states. Rizvi was the chief of a fanatically Muslim organization called the Ittahad-e-Mussalmeen claiming to lead an all-Muslim Armed Volunteer Force of about two lakhs called Razakars( Volunteers ) – marching in the streets of Hyderabad and other cities of the Kingdom threatening peace - loving Hindu citizens – who constituted over 85% of the population of the State.

Sardar Patel Invited Hyderabadi Nizam to Delhi upon declaration of Hyderabad will part of Pakistan Instead of India. Nizam himself didn't came to meet Sardar Patel at Delhi he sent his minister. Patel given great hospitality to Deewan with welcoming and respecting position of Deewan before meeting. During meeting with Sardar, Sardar asked that why would you like to join Pakistan where 85% of populations of Hyderabad is Hindu, Deewan replied on behalf of Nizam that Nizam said, you (Sardar or India) should not come between us (Hyderabad Nizam) and Pakistan. It is our own decision, we can take independently decision of whatever we like, you cannot interfere on that. As far 85% of Hindus are concern, we will kill all of them, then go and ask for any opinion of Hindu.

Next day morning, without waiting for anything Patel sent Indian Army to covered entire Hyderabad from outside, and talk with Nizam that if you would like to part of India, you are welcome or we are also Independent to take any decision about Hyderabad by hook or by cook, Very next moment Nizam has to agree to be part of India. What a patriotism shown by Iron man of India Sardar Patel.