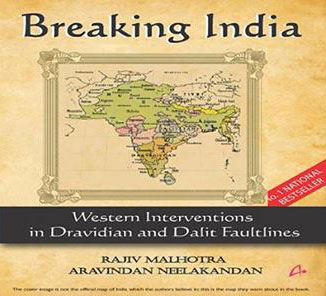 The fabrication of South Indian history is being carried out on an immense scale with the explicit goal of constructing a Dravidian identity that is distinct from that of the rest of India. From the 1830s onwards, this endeavor’s key milestones have claimed that south India: is linguistically separate from the rest of India; has an un-Indian culture, aesthetics and literature; has a history disconnected from India’s; is racially distinct; is religiously distinct; and, consequently, is a separate nation. Tamil classical literature that predates the 19th century reveals no such identity conflicts especially with “alien” peoples of the north, nor does it reveal any sense of victimhood or any view of Westerners or Christians as “liberators.” This identity engineering was begun by British colonial and missionary scholars, picked up by politically ambitious south Indians with British backing, and subsequently assumed a life of its own. Even then it was largely a secular movement for political power (albeit with a substratum of racist rhetoric). In recent decades, however, a vast network of groups based in the West has co-opted this movement and is attempting to transform Tamil identity into the Dravidian Christianity movement premised on a fabricated racial-religious history. This rewriting of history has necessitated a range of archeological falsities and even epigraphic hoaxes, blatantly contradicting scientific evidence. Similar interventions by some of the same global forces have resulted in genocides and civil wars in Sri Lanka, Rwanda and other places. If unchallenged these movements could produce horrific outcomes in South India.

India has its own share of social injustices that need to be continually addressed and resolved. Caste identities have been used to

discriminate against others, but these identities were not always crystallized and ossified as they are today, nor were they against a specific religion per se. Caste identity faultlines became invigorated and politicized through the British Censuses of India, and later intensified in independent India by vote bank politics. A dangerous anti-national grand narrative emerged based on claims of a racial Dalit identity and victimhood. But Dalit communities are not monolithic and have diverse local histories and social dynamics. There are several inconsistencies and errors in these caste classifications: not all Dalit communities are equivalent socially and economically, nor are they static or always subordinate to others. While Dravidian and Dalit identities were constructed separately, there is a strategy at work to link them in order to denigrate and demonize Indian classical traditions (including spiritual texts and the identities based on these) as a common enemy. This in turn, has been mapped on to an Afro-Dalit narrative which claims that Dalits are racially related to Africans and all other Indians are “whites.” Thus, Indian civilization itself is demonized as anti-humanistic and oppressive. This has become the playground of major foreign players, both from the evangelical right and from the academic left. It has opened huge career opportunities for an assortment of middlemen including NGOs, intellectuals and “champions of the oppressed.” While the need for relief and structural change is immense, the shortsighted selfish politics is often empowering the movements’ leaders more than the people in whose name the power is being accumulated. The “solutions” could exacerbate the problems.

An entity remains intact as long as the centripetal forces (those bringing its parts together) are stronger than its centrifugal forces (those pulling it apart). This study of a variety of organizations in USA and Europe demonstrates certain dangerous initiatives that could contribute to the breaking up of Indian civilization’s cohesiveness and unity using various pretexts and programs. The institutions involved include certain Western government agencies, churches, think tanks, academics, and private foundations across the political spectrum. Even the fierce fight between Christians and Leftists within the West, and the clash between Islam and Christianity in various places, have been set aside in order to attack India’s unity. Numerous intellectual paradigms, such as postmodernist critiques of “nation,” originating from the West’s own cultural and historical experiences are universalized, imported and superimposed onto India. These ill-fitting paradigms take center stage in Indian intellectual circles and many guilt-ridden Indian elites have joined this enterprise, seeing it as “progressive” and a respectable path for career opportunities. The book does not predict the outcomes but simply shows that such trends are accelerating and do take considerable national resources to counteract. If ignored, these identity divisions can evolve into violent secessionism.

RELIGION’s ROLE IN THE COMPETITION FOR SOFT POWER

Global competition among collective identities is intensifying, even as the “flat world” of meritocracy seems to enhance individual mobility based on personal competence. But the opportunities and clout of individuals in a global world relies enormously on the cultural capital and standing of the groups from which they emerge and are anchored to. As goes India and Indian culture (of which Hinduism is a major component), so will go the fate of Indians everywhere. Hence, the role of soft power becomes even more important than ever before. Religions and cultures are a key component of such soft power. Christian and Islamic civilizations are investing heavily in boosting their respective soft power, for both internal cohesiveness and external influence. Moreover, undermining the soft power of rivals is clearly seen as a strategic weapon in the modern kurukshetra.

The book raises the question: Who is a “minority” in the present global context? A community may be numerically small relative to the local population, but globally it may in fact be part of the majority that is powerful, assertive and well-funded. Given that India is experiencing a growing influx of global funding, political lobbying, legal action and flow of ideologies, what criteria should we use to classify a group as a “minority”? Should certain groups, now counted as minorities, be reclassified given their enormous worldwide clout, power and resources? If the “minority” concerned has actually merged into an extra-territorial power through ideology (like Maoists) or theology (like many churches and madrassas), through infrastructure investment (like buying large amounts of land, buildings, setting up training centers, etc.), through digital integration and internal governance, then do they not become a powerful tool of intervention representing a larger global force rather than being simply a “minority” in India. Certainly, one would not consider a local franchise of McDonalds in India to be a minor enterprise just because it may employ only a handful of employees with modest revenues locally. It is its global size, presence and clout that are counted and that determine the rules, restrictions and disclosure requirements to which it must adhere. Similarly, nation-states’ presence in the form of consulates is also regulated. But why are foreign religious MNCs exempted from similar requirements of transparency and supervision? (For example: Bishops are appointed by the Vatican, funded by it, and given management doctrine to implement by the Vatican, and yet are not regulated on par with diplomats in consulates representing foreign sovereign states.) Indian security agencies do monitor Chinese influences and interventions into Buddhist monasteries in the northern mountain belt, because such interventions can compromise Indian sovereignty and soft power while boosting China’s clout. Should the same supervision also apply to Christian groups operating under the direction and control of their western headquarters and Islamic organizations funded and/or ideologically influenced by their respective foreign headquarters? Ultimately, the book raises the most pertinent challenge: What should India do to improve and deliver social justice in order to secure its minorities and wean them away from global nexuses that are often anti-Indian?

CONTROLLING THE DISCOURSE ON INDIA

The book shows how the discourse on India at various levels is being increasingly controlled by the institutions in the West which in turn serve its geo-political ambitions. So, why has India failed to create its own institutions that are the equivalent of the Ford Foundation, Fulbright Foundation, Rockefeller Foundation, etc.? Why are there no Indian university based International Relations programs with deep-rooted links to the External Affairs Ministry, RAW, and various cultural, historical and ideological think tanks? Why are the most prestigious journals, university degrees and conferences on India Studies, in sharp contrast to the way China Studies worldwide is under the control of Chinese dominated discourse, based in the West and mostly under the control of western institutions?