Evolution of the 25 paise coin

Evolution of the 25 paise coin

The Reserve Bank of India is withdrawing from circulation coins of 25 paise and below from June 30, 2011. Coins of denomination of 25 paise 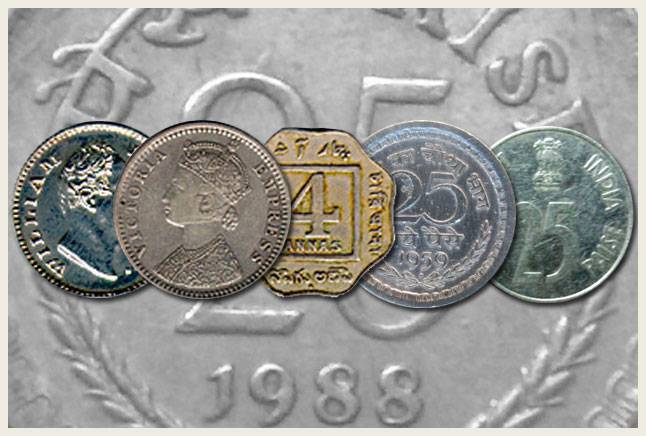 No longer a legal tender: The road has finally come to an end for the humble 25 paise coin. The Reserve Bank of India is withdrawing from circulation coins of 25 paise and below from June 30, 2011. Coins of denomination of 25 paise and below will not be accepted for exchange at the bank branches from July 1, 2011 onwards. We trace the history of the 25 paise coin from the British era to contemporary India.

1830s: The first of the quarter rupee coins were issued in India during the reign of William IV. The coins were made of silver.

1840s: The longest reigning monarch of the United Kingdom, Queen Victoria also held the title of the Empress of India. During her reign a number of quarter rupee coins were issued. Soon after her ascent to the throne, a silver quarter rupee coin was issued in India. The coins featured the bust of a young Queen Victoria. She was made the queen soon after her 18th birthday

1870s: The coins issued later in Queen Victoria's reign had a more mature looking bust of the queen. The one-fourth rupee coins were made of silver.

1890s: While Queen Victoria was adding to her years in real life, she also put in a bit of weight on the her image on the coins.

1900s: The new century also witnessed a change on the British monarchy. Following the death of his mother Queen Victoria, Edward VII was crowned as the King of the United Kingdom and also as the Emperor of India. All new coins issued during the time bore his name and face.

1910s: A new design of coins were introduced in 1919 that sought to replace the existing silver quarter rupee coins. The new equivalent of the quarter rupee coin was the 4 aana coin, that was made from cupro-nickel instead of silver. The rising silver prices following the First World War necessitated this change. These coins had the effigy of King George V.

1920s: George V was crowned the King in 1910. He was also the first reigning British Monarch to tour India. The 4 aana coins introduced in 1919 didn't gain popularity and soon the quarter rupee coins had to be brought back.

1930s: King George VI was the last of the British monarchs to rule over India. His predecessor Edward VIII abdicated the throne in order to marry divorced American socialite Wallis Simpson. There were no coins issued for Edward VIII. While coins of other denominations went for a design change, the quarter rupee coins continued, with only a new monarch replacing the old.

Early 1950s: Following the Independence of India the currency system continued with the British series of coins till the establishment of the Indian Republic. The first coins of independent India were introduced on August 15, 1950 and it included the quarter rupee coin made of nickel. The coins had the words 'char aana' embossed in Devnagri script and had the Ashoka Emblem on one side.

Late 1950s: Another major landmark in the history of the 25 paise coin happened following the introduction of the decimal series in accordance with the Indian Coinage Act that came into force from April 1, 1957. The 19 mm 25 paise coins were called '25 naye paise'. The tern 'naye paise' was used for wider public recognition of the new coinage system and was discontinued from June 1, 1964 when the term 'naye' was dropped. The coins weighed 5 grams and were made of nickel.

1970s: By the late 1960s, Indians had become used to the new coinage system. The text 'rupaiye ka chautha bhag' (one fourth of a rupee) was also replaced by 25 paise. While other coins of lower denominations underwent a major change and moved to aluminium, the 25 paise coin didn't change much.

Late 1980s to the 2000s: In 1988 the 25 paisa coin went steel and was made of ferratic stainless steel. It was a little heavier than its predecessor at 2.83 grams but was of the same size. The last 25 paise coins seen in popular circulation were minted in the year 2002.

A new symbol: In July 2010 the Government of India unveiled the new symbol for the Indian Rupee and designer D Udaya Kumar also designed a new symbol for the paise. But with the 25 paise going out of circulation we are unlikely to see the image above anywhere. 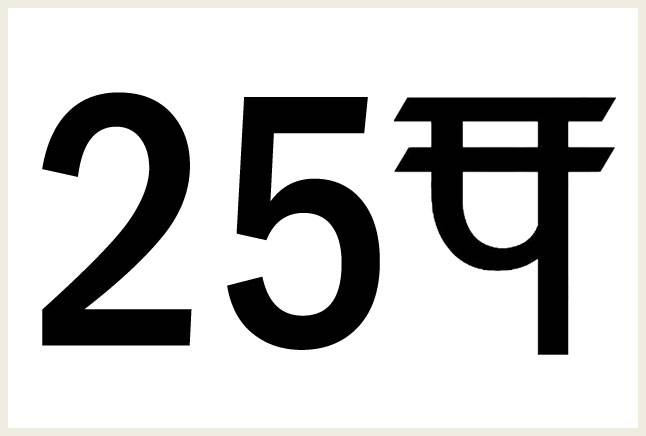