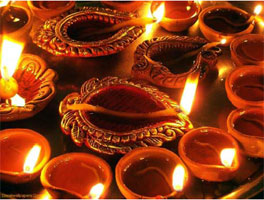 >Unlike other religions Hindu Dharma has many specialties. It is Dharma known as Sanathan Dharma. According to Bhagwad Gita Sanathan means which cannot be destroyed by Fire, Water, Weapons, Air or any such forces and which dwells in each living or non-living being. Dharma is a way of life what we call rituals and customs "Acharans".

So in each and every prayer there is an Acharan which is a component of spirituality which forms a part of every Hindu custom in normal way of life. Well all Acharans are derived from merits available from self experience. We need not follow them blindly if they are without any reasoning.

Our Dharma says that these Acharans should be followed for prosperity, wealth, social bondage, religious outlook to lead the life more systematically and free from any vices.

The most common routine pooja Acharans are lighting lamp, applying Tilak, doing Namaste, performing Pradakshina clockwise and many more. The knowledge, meaning and significance of all these Acharans will solidify our devotion and dedication to our Hindu Sanathan Dharma.

Any Hindu pooja starts with chanting of Mantra. As stated in my previous News letter mantra Japa was a concept of Vedic Hindu sages which incorporates mantras as main form of worship whose ultimate end is Moksha or Liberation. It is also called transcendental chant. So mantra is a sound, syllable word or group of words capable of creating spiritual transformation. They are also syllables considered to be `thought form` representing cosmic power which exert their influence by means of sound vibrations. Each word when spoken produces corresponding effect according to its meaning and vibrations. Now the words contained in the mantra have been arranged in such a way that the vibrations generated from chanting of the mantra brings meditative state of mind which facilitates direct communication with the Divine. Two syllables of the mantra "man" meaning mind and "tra" ( liberation) liberates the mind from the fear and sorrows bringing about one experience what is called Chidanand or Holy Bliss which further brings peace, prosperity and happiness in life. Following are the most common rituals we perform in any Hindu Pooja.

Why do we light a Lamp?

As we all know that any pooja starts with lighting a lamp. Also in any Hindu home a lamp is lit daily in the pooja alter before the God. All auspicious functions commence with the lighting of the lamp which remains lit during the entire function. Light symbolizes knowledge and darkness-ignorance. The Lord is the source, enlivener and illuminator of all knowledge so the light is worshipped as Lord himself. The knowledge is the lasting inner wealth through which all outer achievements can be accomplished. So we light the lamp and bow down to Lord( Knowledge) as the greatest of all forms of wealth.

Here the question is why not bulb or electric light which removes darkness. But the traditional oil/ghee lamp has a further spiritual significance. The oil or ghee in the lamp symbolizes our Vaasnas or negative tendencies which slowly diminish as the lamp goes on and the wick is our ego when lit by spiritual knowledge the ego too finally perishes.

Why we wear a Tilak on forehead??

The tilak or pottu invokes a feeling of sanctity to the wearer and others. It is recognized as a religious mark. Its forms and color vary according to religious sect or the form of Lord worshipped. The Tilak covers the spot between the eyebrows which is the seat of memory and spot of knowledge. In the yoga language it is known as Agnya Chakra.

The Tilak is applied with prayer ``May I remember the Lord, May this pious mark pervade all my activities. May I be righteous in all my deeds and thoughts.`` Even when we forget this prayer, this holy mark will remind us of our resolve. Thus this holy mark is a protection of the Lord which prevents us from any wrong tendencies. Moreover the entire body emanates energy in the form of electromagnetic waves through the spot between the eyebrows and the Tilak prevents the energy loss.

Why we do Namaste ?

We often greet each other with Namaste the two palms are placed together in front of chest and head bows whilst saying Namaste. This greetings is for all persons younger to us or older than us or of equal age. In Sanskrit Namaste means Namah + Te means I bow to you. But the real spiritual meaning of Namaste is honoring the divine soul of each other. Here when we do Namaste we say in our mind that the divine in me is blessed by you and I honor the divine in you. Here it is said that every physical body is mortal while the divine soul is immortal and so we honor each other`s divinity. This is further recognized with oneness with meeting of the palms with head bowed down chanting the glory of the Lord by saying Jay Shree Krishna or Om Shanti or any such Lord`s name.

Why we do Pradakshina (Circumambulate) and why in clockwise direction?

We cannot draw a circle without a center. The Lord is the center source and essence of our lives. Recognizing Him as the focal point in our lives we go round the Lord. This is Pradakshina. Also every point in the center is equidistant from the center. This means that wherever or whoever we may be we are always enjoying impartial grace from the Lord.

Now the circumambulation is to be performed in clockwise direction because by doing so the Lord is always on our right side which is considered auspicious. This reminds us to lead a life of auspiciousness and righteousness.