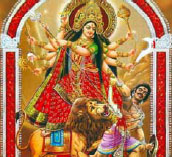 To commemorate the victory of Durga on Mahishasur this festival is celebrated for nine days and tenth day is Vijaya Dashami. One Asura, Mahishasur, in the form of a buffalo, grew very powerful and created havoc on the earth. Under his leadership, the Asuras defeated the Devas. The world was crushed under Mahishasura's tyranny, the Devas joined their energies into Shakti, a single mass of incandescent energy, to kill Mahishasur. A very powerful band of lightning emerged from the mouths of Brahma, Vishnu and Shiva and a young, beautiful female virgin with ten hands appeared. All the Gods gave their special weapons to her. This Shakti coalesced to form the goddess Durga. Riding on a lion, who assisted her, Durga fought Mahishasur. The battle raged for nine days and nights. Finally on the tenth day of Ashvin shukla paksha, Mahishasur was defeated and killed by Durga.