Akha Tij Or Akshay Tritaya considered a highly auspicious day of the whole year, also popularly known as a golden day! On this day the Sun and moon are at their height of brightness. 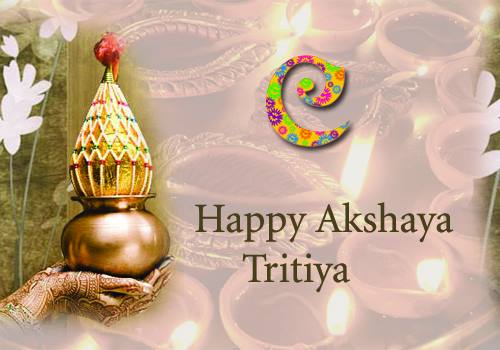 As per Hindu Calendar, on every Vikram Samvat 8, 2072 is celebrated as Akha Tij Or Akshay Tritaya. Akha Tij considered a highly auspicious day of the whole year, also popularly known as a golden day! On this day the Sun and moon are at their height of brightness.

The word Akshaya (अक्षय) means never diminishing. Hence the benefits of doing any Jap, Yagya, Pitra-Tarpan, Dan-Punya on this day never diminish and remain with the person forever.

malefic effects. As per Hindu Electional Astrology three lunar days, Yugadi, Akshaya Tritiya and Vijay Dashami don’t need any Muhurta to start or perform any auspicious work as these three days are free from all malefic effects....so go for it and do sum good today and it will stay with you forever.

This legend is believed to be one of the most significant ones, associated with the celebration of Akshaya Tritiya. Lord Krishna had a poor Brahmin friend, Sudama. Once, on the day of Akshaya Tritiya, Krishna got visited by Sudama. The purpose for his visit was to ask for some financial help from Krishna.

Akshaya Tritiya legend owes to the story of Krishna-Sudama.Sudama was welcomed in a grand fashion by his friend, which embarrassed him even more. Though he was treated with benevolence, Sudama was ashamed of not being capable to present his friend anything, but some Poha (beaten rice). Krishna did not care to mend his attitude toward the bond of friendship and relished the Poha gifted by his dear friend.

Being overwhelmed by the treatment, Sudama could not ask for anything more from Krishna. Hence, he returned home empty handed. On his return, Sudama found his hut transformed into an abode of royalty and everything appeared grand. It was a boon by Lord Krishna that Sudama attained much more than financial help. Since then, the day is celebrated as Akshaya Tritiya.

When is Akha Tij Or When is Akshay Tritaya